Thomas Jane Interview Part 1:
- Growing up in Baltimore & discovering theatre
- Dropping out of High School & taking acting classes
- Bollywood Dreams Come True
- "They wanted me to be 'the white boy' in Indian films"
- "Getting on that Indian film really changed my life"
- Indian Ganja on the plane home & a very close call at JFK
- The bold move to California in the Camaro
- "I got into a lot of trouble, which gave me a lot of experience"
- "I don't watch Tv. I don't watch HBO. I'm busy!"
- "Monty Clift was my hero"
- "We built a theatre on Melrose"
- "I didn't have a backup plan"
- "I experimented with everything. I didn't want to leave anything out. I always had that fascination with life"
- "I don't like borders, I don't like nationalities, & I don't like countries...It all comes from fear"


Thomas Jane Interview Part 2:
- "I'm lucky to be making money at what I love to do...I fell in love with story telling"
- 7 hard years of trying to get noticed
- "Thank God for Johanna Ray"
- "I was a terrible auditioner"
- "Good theatre's a powerful thing, but good theatre's rare"
- "I got pushed into playing a lead too soon"
- "Boogie Nights" was really fun. It was my first real part"
- "Attending red carpet & doing interviews is not in my range"

Thomas Jane Interview Part 3:
- "A great script is hard to come by"
- Why Thomas jane turned down "Stander" & "The Punisher" mutiple times before changing his mind
- "I was never right for Frank Castiglione so we changed him to Frank Castle"
- "I haven't played enough attention to furthering my career"
- Turning down Steven Soderbergh's "Erin Brokovich"
- "You're damned if you do & you're damned if you don't"
- Frank Darabont
- "The Expanse"
- "Ray Donovan" was a great script. I connected with that character"
- "They wanted me to play the sheriff in "The Walking Dead"
- "Gene Hackman was an asshole! But I learned a lot from him"
- "My problem is being around other people. I have fear"
- "Patricia (Arquette) made "Boyhood" from the time I met her until the time we got divorced"
- Not playing 'Wolverine' in Bryan Singer's "X-Men"
- "I brought "The Walking Dead" to HBO but it didn't work out"
- "I just didn't want to be in the "Mad Men" world"
- Thomas Jane's best roles
- "Billy Crystal is a great director!"
- Directing "Dark Country" was my film school"
- Adam Jones from "Tool"
- Directing "A Magnificent Death" with Nick Nolte & Jeremy Irons next
- Working out with Reggie White for "61*"
- Tom Selleck & Dennis Haysbert in batting practice
- Filming "61*" at old Tiger Stadium

Thomas Jane Interview Part 4:
- Using old experiences & yourself as instruments to get the performance
- "I'm always learning from others. acting is not an easy gig"
- Working with Angelina Jolie
- Billy Bob Thornton
- Obsessed with directing
- "There are a hell of a lot of pretty looking people out there, but few are wiling to put in the time to develop"
- Building on theatre on Melrose & breaking down scenes there
- "You first have to figure out if you love it (acting). And the only way to find out is by doing it"
- Sir Thomas Jane's advice to young actors
- "I would say everyone's self-taught. I think it has to be organic"
- High moment & low moment
- "Low moments are sacred. They have a way of becoming more important than the high moments"
- Getting arrested & quitting drinking since
- "Meditating has changed my life!"
- "I think meditation can change the world"
- END CREDITS 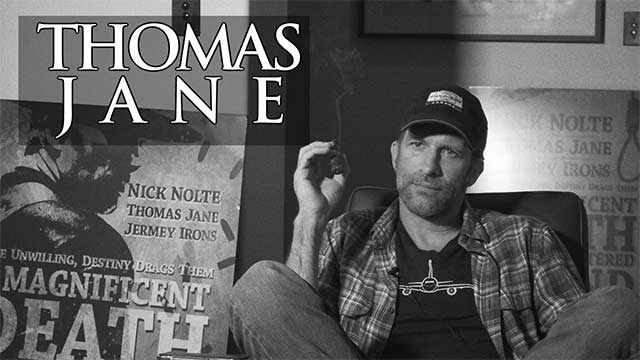 Thomas Jane was born in Baltimore, Maryland, the son of Cynthia, an antiques dealer, and Michael Elliott, a genetic engineer. In 1987, he graduated from Thomas Sprigg Wootton High School. At age 18, he moved to Hollywood to pursue an acting career. He was initially homeless and lived out of his car, often doing street performances to earn money. "I had two songs in my repertoire that I hammered to death, "Hey Joe" and "Knockin' on Heaven's Door". People used to pelt me with change just to shut me up."

Jane, director Jonathan Hensleigh, and Avi Arad have said that Jane was the first and only actor to be asked to play the title role in the film The Punisher (2004). He turned down the role twice, as he did not have much interest in the superhero genre. When they asked him the second time to play the Punisher, it was Tim Bradstreet's artwork of the character that secured his interest. After finding out that the character was not a traditional superhero, but more of an anti-hero and a vigilante crime fighter, he accepted.[citation needed] He read as many Punisher comics as he could find and quickly became a fan, then trained for several months with Navy SEALs and gained more than twenty pounds of muscle.

In addition to starring in the film, he contributed his voice to the video games The Punisher and Gun. He also co-owns RAW, an entertainment company which he runs with Steve Niles and Tim Bradstreet. RAW Studios, the company's comic book division, released Bad Planet (written by Jane) through Image Comics. Jane became a spokesperson for Steve Niles and the cover model for comic book character Cal McDonald in 2006. In addition to his screen work, Jane has appeared several times on stage, and received strong critical reviews as Tom in Tennessee Williams' The Glass Menagerie, and as Chris in Arthur Miller's All My Sons. He has also portrayed a fictionalized version of himself in an episode of the television series Arrested Development

Jane did not return in the planned sequel to The Punisher. Lions Gate Entertainment had approved a direct sequel due to the strong sales of the film on DVD. However, the project lingered in development for over three years. Jonathan Hensleigh completed a first draft of the script before leaving the project in 2006. John Dahl was in talks to direct the film, but cited his dislike of the script and the reduced budget as his reasons for refusing. In a statement on May 15, 2007 and in two audio interviews, Jane said that he pulled out of the project due to creative differences and the studio's further reduction of the budget.

Jane said in June 2007 that Zack Snyder had expressed interest in casting him for the role of "The Comedian" for the adaptation of Alan Moore's graphic novel Watchmen, but because he was too busy, he turned down the role. The same year he starred in Frank Darabont's adaption of the Stephen King book, The Mist. His directing debut was the 2009 film Dark Country, in which he also played the main character. In 2009, Jane starred with Ving Rhames in the crime film Give 'Em Hell, Malone, which premiered at San Diego Comic Con.
Jane at the 2007 San Diego Comic Con.

On December 18, 2008, HBO announced it was picking up the dark comedy Hung, and Jane was contracted to star in the show. He plays the character of Ray Drecker, a high school history teacher and basketball coach, who, after attending a self-help class while being down on his luck, decides to market the large size of his penis as a path to success. The series was renewed for a second season which aired in the summer of 2010. The show was renewed for a final season, which aired in fall of 2011.

Jane married actress Aysha Hauer, daughter of Rutger Hauer, in 1989. The couple starred in a number of films together before they divorced in 1995. Jane was engaged to Olivia d'Abo from 1998 to 2001. After meeting through mutual friends in 2001, Jane and actress Patricia Arquette became engaged in 2002. Their daughter, Harlow Olivia Calliope, was born on February 20, 2003. Jane and Arquette subsequently married on June 25, 2006 at the Palazzo Contarini del Bovolo in Venice, Italy.

In January 2009, Arquette filed for divorce from Jane on the grounds of irreconcilable differences, but the couple soon reconciled and Arquette requested to abandon the divorce petition on July 9, 2009. However, on August 13, 2010, Jane's representative announced that Jane and Arquette had decided to proceed with a divorce. The divorce was finalized on July 1, 2011. The pair were granted joint custody of their child.

In 2015, Jane will star in Syfy's miniseries The Expanse, and History Channel 8-part miniseries Texas Rising.