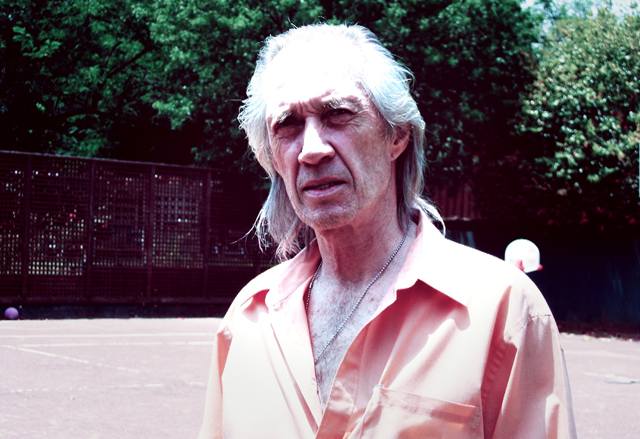 - Excelling in individual sports
- Brothers Carradine
- The Talented Mr. Keith carradine
- Ambitious Beatnik
- Shakespearean Repertory
- 'The Royal Hunt of the Sun' on Broadway
- The significance & inspiration of Marlon Brando
- "I think movies are more important than theatre. Stage acting is so easy"
- "F*ck the critics, man!"
- "Everybody loves Quentin! It's impossible not to love him"
- Travelling music show on weekends of 'Kung Fu'
- "Everybody has a difficult time saying what my music style is. But I hope its not folk"
- "I'm a terrible collaborator in music"
- "Quentin is the absolute master of what he does but he'll listen to anybody"
- "Performances are not in what words you say, it's in how you say them"
- 'Boxcar Bertha', Roger Corman, & the birth of truly Independent Films that wasn't a B movie
- Roger Corman's incredible eye for talent
- Marty Scorcese & his All Star students at NYU
- "Tarantino could miss a couple of the good movies but he won't miss any of the bad movies. He finds lessons in them"
- On 'Death Race 2000' - "People wanted to see the mistakes in these movies, & Roger (Corman) knew that"
- "The biggest regret in my career was not being directed by Roger Corman"
- Cameo in 'Mean Streets' - "Marty is very loyal...'Kung Fu' conflicted with 'Mean Streets"
- "I gave Marty 'The Last Temptation of Christ' book because he was a Jesus freak. I told him if you don't make this movie then you're full of sh*t!"
- "Marty wanted me to play Jesus, & my lady Barbara Hershey to play Mary"
- "When we did 'Mean Streets' I thought De Niro was a goofy, interesting guy, & I thought Harvey (Keitel) was going to be the Laurence Olivier of America"
- PIANO BREAK
- On 'The Long Riders' - "Walter Hill was my favorite director until I met Quentin"
- "Walter was great to work with. he never lost his temper. Quentin would lose his temper but he would joke about it"
- "Some of the movies I did I never hoped for much, but some of them I did & they turned out badly"
- "Dennis (Hopper) was never a true leading man. Nobody paid too much attention to Dennis as a supporting actor either. He was a James Dean freak....he was pretty much in the background until he directed 'Easy Rider'
- 'Colors' was f*cking brilliant movie!"
- "Dennis was as hip as you can get....he was an entirely different category of person. Dennis was excessive. He stayed on payote constantly in Taos"
- "I didn't get into drinking much because I was obsessed with coffee. I'm a connoisseur of it"
- Carradine's theory about coffee
- "When I make coffee, I like to just waste the coffee so that its nice & rich"
- "I hate Starbucks! I hate that they try to rule the world....I think suicide bombers should go into Starbucks"
- "I figured if I'm going to smoke a Cuban cigar I'd do my f*cking smuggling"
- "Bruce Lee had absolutely nothing to do with the development of 'Kung Fu' & was never considered for the part........I'll tell you whole story, here's what really happened..."
- "Bruce was the James Dean of kung fu. For a while, we were the ying & yang of kung fu"
- "Bruce's expertise was scarcely the point. He just wasn't what they were looking for in 'Kung Fu"
- HARMONICA BREAK
- Kung Fu & Tai Chi history with Kam Yuen & Rob Moses
- "I'm tough as nails, & I can still sing, dance, & do all the moves"
- On formally practicing kung fu - "I've never liked the idea of discipline. I prefer freedoms"
- David Carradine's diet, herbs, & sleeping habits
- "The only thing that kept me awake was grass. Coffee didn't do shit for me"
- "Shatner had no other possible job but 'Star Trek'. Shatner is not exactly an actor, I'm a real f*cking actor like Dustin Hoffman or somebody"
- "Quentin loved 'Kung Fu' but that's not who he hired for 'Kill Bill....Bill is not Kwai Chang Caine, he's closer to the guy I really am"
- "Quentin was able to recite all the dialogue of the film I directed 'Americana"
- "Destiny prevails. Doing 'Kung Fu' turned out to be a more important statement than playing 'Hamlet' on Broadway. 'Kung Fu was supremely important to the world"
- "The essence of 'Star Trek'.....I got to say, Shatner IS an actor. It's sad that Leonard Nimoy never had another career, & he was real f*cking actor"
- The 'Kung Fu' contract & why Carradine walked off the series.
- How Carradine got the call from Tarantino
- "You'll see that this movie couldn't have starred Warren Beatty"
- The Carradine 'Bill look'
- What Carradine hoped for from the comeback
- When Carradine & Tarantino first met
- "I don't like girl movies....but I go to everything Sandra Bullock does"
- "Lawrence of Arabia is hands down the best ever made"
- "Scorcese has not made the best movie of all time yet.....he feels he has yet to show us everything"
- "Lethal Weapon' was DYNAMITE!"
- "I go to every move Mel (Gibson) & Bruce (Willis) make"
- "I can't watch 'Schindler's List"
- "Spiderman was not my favorite comic book character"
- So-called Independent Films

In a professional career spanning 45 years, David Carradine has appeared in 118 films, 32 plays, 27 television movies of the week, miniseries and dramatic specials, 35+ guest appearances on various series and the star in 3 series.  His second starring role, as Caine in Kung Fu, evolved into becoming one of the most iconic roles in the history of television.  In addition to the smash hit series that garnered Carradine both Emmy® and Golden Globe® nominations, it also introduced many viewers to Asian martial arts and Chinese philosophy.  There were also two television movies, Kung Fu, The Way of the Dragon and Kung Fu The Movie.  Carradine resurrected his Caine character with a second series, Kung Fu, The Legend Continues, which he also co-produced.  He also authored Spirit of Shaolin, A Handbook of Kung Fu Philosophy and voiced Caine, The Kung Fu Adventure Online.
A member of one of Hollywood’s acting dynasties, Carradine followed his father, John, a star of screen and stage dating back to the golden era of the Hollywood into the family business.  Carradine and his well-known brothers represent the second generation and many of their children make up a third generation of established actors.
In feature films, Carradine began working more than four decades ago appearing in such films as Taggart, starring Dan Duryea and Bus Riley’s Back In Town, starring Ann-Margret.  Highlights from his 118 films include:
* Martin Scorsese’s first Hollywood feature Box Car Bertha, opposite Barbara Hershey;
* co-starring with Liv Ulmann in Ingmar Bergman’s only English language feature and the only one shot outside Sweden, The Serpent’s Egg;
* The Roger Corman cult classic, Deathrace 2000;
* Starring as folk music legend Woody Guthrie in Bound For Glory for director Hal Ashby, a performance for which he was named Best Actor by the National Board of Review® and nominated for a Golden Globe®;
* Robert Altman’s The Long Goodbye;
* Scorsese’s classic, Mean Streets;
* Co-starring with his brothers Keith and Robert, as well as other actors/brothers with the surnames of Quaid, Keach and Guest in Walter Hill’s Western, The Long Riders;
* Starring, directing, producing, editing and composing the main theme for Americana, a film which was awarded the People’s Prize at the Director’s Fortnight of the Cannes Film Festival;
* The notorious title character in Quentin Tarantino’s smash hit, Kill Bill Vol I., another role which garnered him a Golden Globe® nomination;
* The second part of Tarantino’s saga, Kill Bill Vol. II;
* And his most bizarre performance to date in another cult classic, Sonny Boy, portraying an ex-con living out his life cross-dressing as a mid-Western housewife, while running a gang of thieves.
Carradine’s television work also covers more than four decades, dating back to appearances on such series as
* East Side, West Side, starring George C. Scott,
* Wagon Train,
* Alfred Hitchcock Presents,
* Gunsmoke,
* Ironside and
* Rod Serling’s Night Gallery.
* His first starring role in a series was as the title character in the series Shane, based on the classic film.
He continued making guest appearances on such series as
* The Young Riders,
* Dr. Quinn Medicine Woman,
* Profiler,
* Charmed,
* Just Shoot Me and
* Medium.
He had recurring roles on the series
* Largo Winch,
* Family Law, T
* The Queen of Swords and
* Alias.
In the miniseries genre,
* He starred in Mr. Horn,
* Was impressionist artist Paul Gaugin in Gaugin, The Savage,
* And portrayed one of his most menacing characters ever in the Civil War era epic hit miniseries, North and South and it’s sequel, Love and War: North and South II.
His television movies and dramatic specials include productions of
* The Bad Seed, appearing opposite Mia Farrow in a David Susskind produced adaptation of Johnny Belinda,
* Gambler IV – The Luck of the Draw,
* By Dawn’s Early Light
* And The Outsider, among many others.

In a theatre career that began while he studied drama at San Francisco State College, Carradine was soon appearing in some of the Bard’s classic works at both the San Francisco Shakespeare Festival and the Ohio’s Great Lakes Shakespeare Festival.  Even during his stint in the Army he continued to act, producing, directing and performing in musicals and dramas for the U.S. Army Entertainment Unit.  Upon his honorable discharge from the military, Carradine found himself in New York and began working his way upward in the theatre world at the same time he was beginning to pursue his film and television career.
He landed a leading role on Broadway in The Deputy.  For another  play on Broadway, The Royal Hunt of the Sun, starring opposite Christopher Plummer, Carradine was named Most Promising New Personality by Theatre World.  He continued to do classical and contemporary theatre work in New York and at major regional stages around the country.
As a published author, David has also written his autobiography, Endless Highway, as well as The Kill Bill Diary, a day-to-day journal of his experience on the film set and beyond, and two martial arts related instructional books, David Carradine’s Tai Chi Workout and The Healing Art of Chi Gung.  He has produced and starred in a series of martial arts workout videos, beginning with David Carradine’s Kung Fu Workout, and a number of others on Tai Chi, Chi Gung, Cheng Tai Chi Meditation and Kung Fu Kick Boxing.
In addition to his ongoing pursuits as an actor, producer, director and writer, Carradine also is a composer, musician and singer.  He has released the albums Grasshopper and As Is, as well as singles, including You and Me, Troublemaker and Walk The Floor.  Affirming his status as an acting legend, Carradine has his own star on Hollywood’s Walk of Fame.