Rob Dibble was born on January 24, 1964 in Bridgeport, Connecticut, and is a former Major League Baseball pitcher.
"Dibs" was a promising young pitcher with a blazing fastball that often exceeded 99 mph, he was drafted by the Cincinnati Reds in the first round of the 1983 amateur draft, and made his debut with the Reds on June 29, 1988.
On June 4, 1989, Dibs struck out three batters on nine pitches in the eighth inning of a 5–3 win over the San Diego Padres. Dibs became the 14th National League pitcher and the 22nd pitcher in Major League history to accomplish the nine-strike/three-strikeout half-inning.
He was an MLB All-Star in 1990 and 1991, and was the 1990 NLCS Most Valuable Player (along with fellow "Nasty Boy" Randy Myers). Also in 1990, Dibble and his Reds won the World Series by beating the Oakland Athletics 4 games to 0.
As a member of the Cincinnati Reds, the reliever recorded his 500th career strikeout in fewer innings—368—than any other pitcher in modern baseball history. Nolan Ryan, Bob Feller, Sandy Koufax and Lee Smith all needed more than 500 innings to strike out 500 batters.
During his career Dibs often was known for his temper. After one game, he threw a baseball into the outfield seats at Cincinnati and struck a woman. He was also involved in a brawl in 1991 with Astros shortstop Eric Yelding. That same season he was caught attempting to throw a baseball into the back of Cubs outfielder Doug Dascenzo as he ran down the first base line. Finally, Dibs was involved in a locker room brawl with Reds manager Lou Pinella after a game. In a "turn back the clock" game against the Mets at Shea Stadium in 1992, Dibble gave up a walk-off homer to Bobby Bonilla, and was seen on national TV ripping the old timers jersey off leaving the field.
Dibs required surgery to his pitching arm in 1994, and missed the entire season as a result. Dibs signed with the Milwaukee Brewers and also played with the Chicago White Sox. He signed with the Chicago Cubs at the end of the 1995 season, but didn't appear in a game. He signed with the Florida Marlins for the 1996 season, but missed the entire year due to injury, and retired soon after.
In 1998, Dibs joined ESPN as a baseball  analyst, working mostly on the radio show hosted by Dan Patrick. Dibble worked on The Best Damn Sports Show Period as a co-host until 2008, when he left to join FOX on their Saturday baseball program as an analyst. Dibble also spends time as a co-host/analyst of Baseball This Morning on on XM  Channel 175/Sirius channel 210. He formerly hosted The Show (on the same channel), with co-host Jody MacDonald. Dibs served as co-analyst with Kevin Kennedy for FOXSports.com on a weekly video segment entitled "Around the Bases," served as a Little-League baseball coach in Avon, CT during the 2001 season. Dibs also is a co-host with former Major League player Denny Hocking on Fox Sports Radio Sunday night programming. In 2009, Dibs signed a 3-year contract to replace Don Sutton as the color voice of the Washington Nationals on MASN. 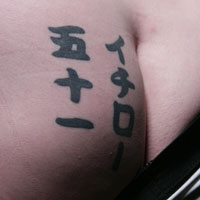 Dibs' 'ICHIRO' kanji tatoo on his butt cheek. Dibs manned up and got the 'Ichiro' tatoo for an on-air bet he lost to co-host Dan Patrick. He bet Dan that Ichiro wouldn't hit .300 in his rookie year. The great Ichiro hit .350, lead all votes to become an All Star, was AL Rookie of the Year, and MLB MVP!