Barry Katz Interview Part 2:
- Interviewing Gavin Polone
- "I feel they feel safe"
- Connecting with the guest
- Pre-interview chat with Kevin Farley
- "I love managing!"
- How Kirk Fox turned a negative into a series regular
- The Shelley Winters' & her Oscars
- Cheri Oteri's recent triumph
- Bigger fish in a small pond
- The brilliance of Andy Dick
- The unfortunate reputations of Tom Arnold, Wesley Snipes, & Andy Dick
- "Jay Mohr was ten times better than everyone else!"
- Tom Brady vs Eli Manning
- On Dave Chappelle: "Sometimes you just know!"
- The Fed Ex envelope trick
- Time management
- "No one can play the role in your life but you"
- Barry created a car accident

Barry Katz Interview Part 3:
- Just show up!
- "I always feel like a failure. But I think that's what drives me"
- Being blindingly ballsy back in the days
- The Boston Comedy Club versus .....
- "I've been fired more than anybody!"
- "Take the hit doing great work!"
- "I'm all in!"
- "Love the business you're in, love the work that you do but don't fall in love with it"
- "Daddy, why are you on the phone in our vacation?"
- Editing the podcast
- Inspirational journey of the greats in show business
- Doc Gooden's perfect game at old Yankee Stadium with Jay Mohr
- Barry's first podcast appearances on 'Mohr Stories'
- A reluctant podcast star was born
- A touching moment with Jay
- The real Jerry Maguire & Rod Tidwell

Barry Katz Interview Part 4:
- Biggest challenge creating weekly content for the Industry Standard podcast
- The Cold Opening
- "Rolls Royce" Clayton
- Are reality shows rigged?
- "Reality Shows are not fake. But they are orchestrated"
- Tonight, you be the hammer"
- A manager's role in covering up a star client's controversy
- Hush money & PR moves
- Tom Brady & 'Deflategate'
- "You can't save yourself from yourself"
- MLB cheaters
- David Chappelle's belief in himself
- Barry's late mother Barbara Katz
- End Credits
- One last story about Barbara Katz 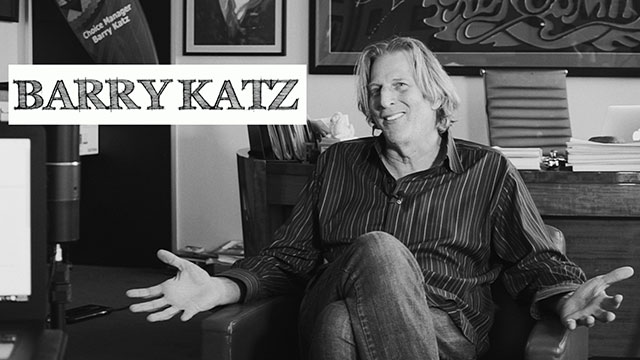 Barry Katz was born in Longmeadow, Massachusetts and graduated from Boston University with a degree specializing in working with the disabled. Katz started his "alternative" career as a stand-up comic in Beantown, and it was there that he performed with such established artists as Denis Leary, Bob Goldthwait, and Steven Wright; while also managing various comedy clubs in the New England area for over a decade. In the early 90's, he decided to quit performing and move to New York City, opening up the Boston Comedy Club in Greenwich Village, while simultaneously starting his own management company that immediately landed 4 clients on Saturday Night Live. This led him to expand his operation to LA where he signed a 4 year overall executive producer deal with Disney to develop television shows, and went on to broker an unprecedented 100 TV development deals.

After 15 successful years at the helm of his own company, in 2003 Katz merged his business with New Wave Entertainment and over the next 8 years, helped build it into a respected full service talent management, digital distribution, and TV/film production company with over 25 managers, producers, and development executives. Universally known for helping launch the careers of some of the most groundbreaking comedy artists in the business-including Dave Chappelle, Dane Cook, Anthony Clark, Nick Swardson, Tracy Morgan, Nick DiPaolo, Darrell Hammond, Whitney Cummings, Jay Mohr, and Louis CK-Katz left New Wave in 2011 to go back to running his own company again.