David O. Russell Interview Part 2
- Directing the Bradley Cooper, Robert De Niro fight scene
- The detail of working with a large ensemble. "Every single character in a scene matters"
- "I'm just loving the worlds we are creating right now"
- The casting of Paulie Herman
- Working with superstars
- Ad-libbers & being an open collaborator 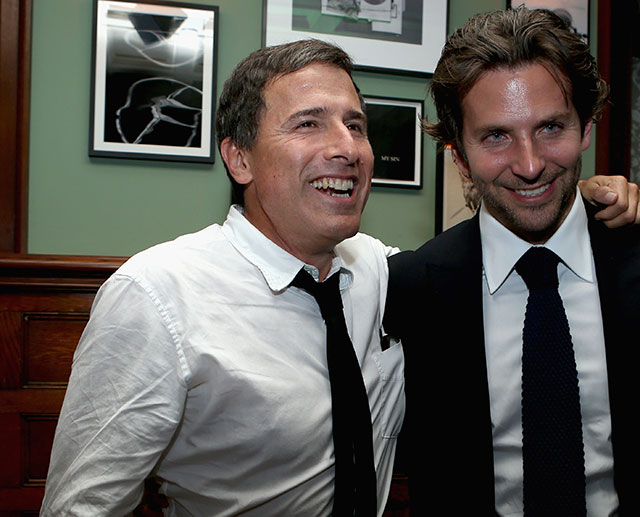 David O. Russell was born in New York City, New York to a Jewish father and an Italian American Catholic mother, and was raised in an "atheistic" household. He graduated from Amherst College in 1981, majoring in Political Science and English.
His first directorial effort was the independent dark comedy Spanking the Monkey in 1994, starring Jeremy Davies as a troubled young man who develops an incestuous relationship with his mother (Alberta Watson). Despite the controversial subject matter, the film received critical acclaim and won him Best First Screenplay and Best First Feature from the Independent Spirit Awards, as well as the Audience Award at the Sundance Film Festival.
His next project was another independent comedy, Flirting with Disaster (1996), about a neurotic man (Ben Stiller) who travels with his wife (Patricia Arquette) and a high-strung caseworker (Téa Leoni) to find his biological parents. The film was well-received by most critics. Roger Ebert said of the direction, "Russell finds the strong central line all screwball begins with, the seemingly serious mission or quest, and then throws darts at a map of the United States as he creates his characters."
The success of those two films led to the Gulf War thriller Three Kings, starring George Clooney, Mark Wahlberg, Ice Cube and Spike Jonze. Adapted from an earlier script by former stand-up comic John Ridley, the film follows three American GIs who devise a plan to steal hidden Kuwaiti gold during the 1991 Iraqi uprising against Saddam Hussein. Filmed in the deserts of Arizona, California and Mexico, and featuring actual Iraqi refugees as extras, Russell used several unique cinematic techniques to achieve a feeling of realism. He filmed using handheld cameras and Steadicam, and shot on Ektachrome slide photography stock that was cross processed in colour negative chemicals, to reproduce "the odd colour of the newspaper images [of the Gulf War]." He also insisted on filming all of the explosions in one shot, as opposed to a typical action film.
Three Kings was released in 1999 and was his biggest critical and financial success. It grossed $60 million in the United States and over $100 million worldwide. It holds a 94% at Rotten Tomatoes, with the consensus "Three Kings successfully blends elements of action, drama, and comedy into a thoughtful, exciting movie on the Gulf War." It ended up being the first of several collaborations with Mark Wahlberg.
His next project was the existential comedy I Heart Huckabees.
After a six-year hiatus Russell returned with The Fighter, a biographical sports drama produced by and starring Mark Wahlberg. The film focuses on junior welterweight boxer Mickey Ward's rise to claim the WBU Light Welterweight title, as well as his difficult relationship with his mother, Alice Ward (Melissa Leo), and his older half-brother Dickie Eklund (Christian Bale). The film became a major critical and financial success, grossing $73 million as of January 26 and appeared on several critics' year-end top ten lists.
On January 25, 2011, the Academy of Motion Picture Arts and Sciences announced their nominees for the 83rd Academy Awards. The Fighter received seven, including Best Picture and Best Director for Russell, the first of his career.