Jason Mayhem Miller Interview Part 1
- Tough love from Dad
- Intro to Gracie Jiu-Jitsu from Pierre
- Getting into MMA
-"Getting punched in the face is the original drug!"
- "Jean-Claude Van Damme is why I'm in Mixed Martial Arts"
- The impact of the movie "Bloodsport"
- How MTV's "Bully Beatdown" came about


Jason Mayhem Miller Interview Part 2
- Fighting with a smile
- The impact Mayhem wants to make on MMA
- Beating Mayhem's idol Kazushi Sakuraba in DREAM
- Pre-Fight Nerves or Dance Rehearsal?
- "Dude, I have an awesome job!"
- "I was always more influenced by comedians than fighters"
- Is Mayhem underrated?


Jason Mayhem Miller Interview Part 3
- "I blew a big opportunity with the Jake Shields fight"
- What Mayhem's developing for the next level - Loving & respecting Japan
- Ring vs Cage
- Unfinished business with Shields
- Mayhem calling out Nick Diaz! "Don't be scared homie!"
- "Nick Diaz is super overrated!"
- "I would like to beat him up personally to show just overrated he is"
- Sleepy eyes
-"I looked like a meth addict at 170lbs"


Jason Mayhem Miller Interview Part 4
- On Anderson "Spider" Silva vs Chael Sonnen
- "The most important thing fighting in MMA is wrestling"
- MMA vs Boxer debate
- DREAM vs K-1 - On Dana White
- The Strikeforce Brawl with Jake Shields and the Diaz brothers
- "I fought all the Strikeforce champions in one night!"
- "Dana White is just a smart businessman. Of course he has to put his company above all others"
- On MMA Heavyweights, Fedor Emilianenko, Alistair Overeem, & Brock Lesnar


Jason Mayhem Miller Interview Part 5
- Typical training day - Over training
- Extra fun in JAPAN! "My brain still hurts just thinking about partying in Japan!"
- The move to OC to stay focused on training
- Acting ambitions - "Mayhem" the sitcom star
- "I'm gonna be the best rich guy ever!"
- Fighting past his prime - Steroids in MMA
- "Mayhem's" take on Performance Enhancing Drugs in sports
- "I come down from 206lbs to fight at 185lbs! Is that cheating? Kinda!"


Jason Mayhem Miller Interview Part 6
- On Paris Hilton - "That's what skinny crackhead chicks do!"
- "Maybe Brock Lesnar's not juiced"
- "I've taken drugs that later came on the list"
- "Oxygen shots were just annoying!"
- "They're not REALLY testing the dudes because they know fighters will cheat the test
- "The best fight I won was the last one I won, so it's the Sakuraba fight"
- Frustrations of the Jake Shields fight
- Misconceptions about "Mayhem"
- "You either get it & love me, or you don't get it & you hate me. I'm cool with that. At least, I'm polarizing"
- Trash talking before fights? - Chael Sonnen & his trash talking 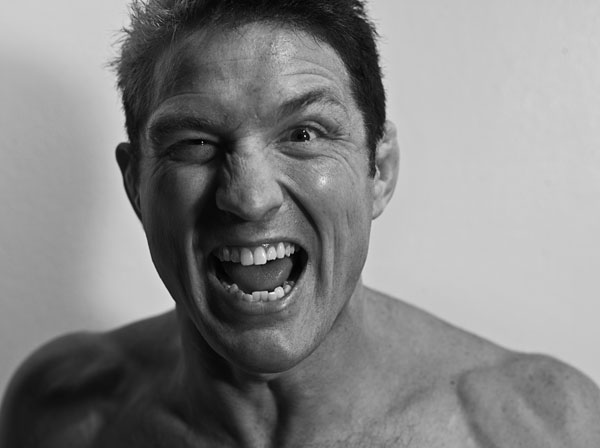 JASON “MAYHEM” MILLER is an American mixed martial arts middleweight fighter known for his flashy entrances, exciting fighting style, and magnetic personality both in and out of the sport. He hosts Mark Burnett Productions’ Bully Beatdown on MTV, a reality show that pits real life bullies against professional MMA fighters to teach them a lesson. Mayhem also provides color commentary for King of the Cage on HDNet. In radio, he has guest hosted Loveline and regularly co-hosts “Mayhem Mondays” on The Jason Ellis Show on Sirius XM. Mayhem is a veteran of mixed martial arts with more than 30 wins to his credit against some of the top fighters in the sport. Beginning his MMA career in high school, Mayhem skipped his senior prom and took his date to watch him fight his first MMA bout in Virginia Beach. Moving cross-country to pursue his dream of becoming a professional fighter, Mayhem ended up living in his van outside of the Huntington Beach Ultimate Training Center in California so he could train full time without any distractions. He has fought in a variety of organizations, most notably the Ultimate Fighting Championship, DREAM in Japan, and currently is a top contender in STRIKEFORCE, which airs on CBS and Showtime. - http://mayhemsmonkeys.com