Peter Stormare Interview Part 1
- Catching up with Peter from 18 years ago
- The impact of Fargo
- "The life of a theater actor is like being a foot soldier"
- "I'm like a grasshopper"
- Gaer Grimsrud
- Miller's Crossing
- "Now it's time to leave!"
- "Cells in your body will fight to protect you until the bitter end"
- No blings
- "I have a path I have to walk"
- "Ingmar Bergman took me under his wings"
- "Nor time, nor space can keep us apart"
- The chosen one
- Armageddon
- "I could have chosen a very different path after Fargo"
- "Happiness is nothing you can grab, but you can strive for it by doings things"
- "You can fix your problems within. Without a shrink!"
- John McEnroe's last racket

Peter Stormare Interview Part 2
- Choosing projects
- Keanu Reeves, Brad Pitt, Jphnny Depp, & Terry Gilliam
- Helping young filmmakers
- Brick and mortar
- "I'm a grasshopper"
- "You have to love yourself before you can help others"
- "I hate pictures too....I want to taste & feel life. I want to meet people"
- "I'm a daydreamer....for me, imagination is real"
- "I don't like doing long interviews"
- "You're one of the reasons why I'm married to my wife!"
- Ingmar Bergman & theatre politics
- "Lot of people loathed me in Swedish Theater"
- "I chose Stellan Skarsgard to be my mentor"
- "Stellan walked his path & never looked back"
- Dancer in the Dark
- Lars von Trier vs Bjork
- Bjork's decision to not release an official soundtrack
- "They drove her (Bjork) too hard!"
- Lars von Trier shooting "I've seen it all" in Dancer in the Dark with a 100 Sony handheld cameras
- "The movie theaters are going away, but horses disappeared when the cars came too"

Peter Stormare Interview Part 3
- "I don't do research because I use my imagination"
- "My costume designer always decides what I should wear"
- "I'm just a color in a big painting"
- "Acting is like being a magician"
- "Acting is a trick!"
- "Ingmar Bergman told me 'you have to be a question mark in the theatre"
- Autumn Blood
- "I THINK ALL THAT (sense memory & Meisner method) IS ALL PHONY BULLSHIT!"
- "Stanislavski has been misinterpreted in this country"
- "The best way to be a carpenter is to make 200 fucking cabinets before its refined & good! It's the same in acting!"
- "Acting school is a fraudulent business to me"
- "They want to teach you how to audition now. They don't even want to teach you acting anymore"
- "I'll be spending more of my time directing experimental fragmental movies"
- "I loved the Fargo pilot"
- "There was so much posing on Mad Men"

Peter Stormare Interview Part 4
- Working with Steve Buscemi again
- "Matt Damon was fantastic!"
- "I'm not a party guy, I like silence"
- The Beatles, The Clash, & Nirvana
- "I never had a low moment"
- "I take pride in that people respect me"
- END CREDITS 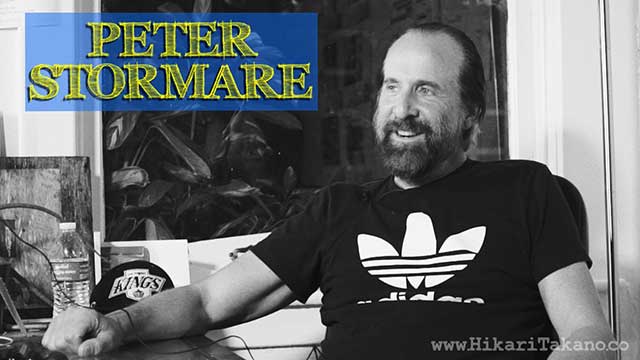 Peter Stormare was born in Kumla, Närke, Sweden and grew up in Arbrå, Hälsingland. He changed his surname when he discovered that he shared it with a senior student at an acting academy. Like "storm" (a word which has the same meaning in Swedish and English), "stormare" is a Swedish word, meaning "stormer". Before settling on "Stormare", he briefly contemplated changing his name to "Mrots Retep", which is simply "Peter Storm" backwards.
Stormare began his career with the Royal Dramatic Theatre, to which he belonged for 11 years. In 1990, he took a leading position as Associate Artistic Director at the Tokyo Globe Theatre and made a name for himself through various Shakespeare performances, including Hamlet. Three years later, he moved to New York City and mainly took part there in English language productions. He played Carl Hamilton, a fictional Swedish secret agent. He was discovered by international audiences for his critically acclaimed role as one of the kidnappers in Fargo (1996). He portrayed Dieter Stark in the 1997 film The Lost World: Jurassic Park and later played sleazy, unlicensed "eye-doctor" Solomon Eddie in Minority Report.
In 1998, he appeared in "The Frogger", a Seinfeld episode where he played a rogue electrician known as Slippery Pete. He portrayed Uli Kunkel in the 1998 film The Big Lebowski, as well as playing Lev Andropov, a Russian cosmonaut in the 1998 film Armageddon. In 1999, he appeared as a villainous producer and director of hardcore porn in the film 8mm. He also portrayed Gunny in the 2002 film Windtalkers and Alexei in the 2003 film Bad Boys II. In 2003, he played Ernst Röhm in Hitler: The Rise of Evil. In the 2005 film Constantine, he played Lucifer. He played an interrogator in the 2005 film The Brothers Grimm. His first major character in television was on the Fox series Prison Break in 2005 for the first two seasons, where he played the inmate mob boss John Abruzzi. He was originally cast in Fido, but opted out of the film upon being cast in Prison Break.
Stormare voiced Mattias Nilsson in the video games Mercenaries: Playground of Destruction and Mercenaries 2: World in Flames, Isair in the computer game Icewind Dale 2, and Johann Strauss in Quake 4. In February 2006, he starred as Wolfgang in Volkswagen's VDub series of television commercials. He played the main character in the film Svartvattnet, which was filmed in Sweden and Norway in 2007. In the 2007 film Premonition, he played Dr. Roth. In April 2007, he appeared in the CSI: Crime Scene Investigation episode "Ending Happy".
In December 2007, Stormare participated in the Swedish reality show Stjärnorna på slottet. He appears in Command & Conquer: Red Alert 3 as Dr. Zelinsky, a Russian scientist who builds a time machine. He starred as Walter in the Canadian independent crime thriller Small Town Murder Songs (2010). He appeared in the music video of the song "Uprising" by the Swedish power metal band Sabaton. He plays himself in the 2011 Norwegian comedy Hjelp, vi er i filmbransjen and appeared as a psychiatrist in the Swedish horror film Marianne (2011). He appeared in a trailer for the video game Call of Duty: Black Ops II, made for the "Revolution" DLC pack. He has since reappeared in most trailers for the game.
In 2014 - Television, Stormare has recently appeared in episodes of Longmire, Arrow and The Blacklist. 2014 starred in the Eli Roth produced film Clown, who portrayed Karlsson.
In 2015 - Stormare voiced, and motion captured, the character Dr. Alan Hill, in the video game Until Dawn.
After Bono of U2 heard some of Stormare's music, he encouraged Stormare to make an album. In 2002, Stormare released his first album, Dallerpölsa och småfåglar. He plays in a band called Blonde from Fargo and runs a record label called StormVox.
Stormare divides his time between the United States and Sweden. He married actress Karen Sillas in 1989; they divorced in 2006. He married Toshimi, a native of Japan, in 2008. Their daughter Kaiya Bella Luna Stormare was born on May 9, 2009.
Stormare is the godfather of Gustaf Skarsgård, the son of Swedish actor Stellan Skarsgård. While working on a Disney film in Prague, he was introduced to Bob Dylan after Dylan's concert by bassist Tony Garnier. His nephew is The Sound of Arrows singer-songwriter Stefan Storm.
Stormare is a Christian. When he was young, he participated in Baptist meetings in Arbrå. He has a strong spiritual side, inherited from his mother, who claimed to be a medium, and who inherited this from her own father.