Roy Firestone Interview Part 1
- "The human condition is what always interested me in my interviews"
- "My interviewees were more comfortable talking about their influences than themselves"
- 'Up Close' post production & day to day workflow
- "I think I felt better everytime I did an interview"
- "Everyone had a story, whether they could articulate it or not, & it was my job to find that story"
- "I didn't care about looking at stats sheets before an interview"
- "...using Wikipedia is the biggest mistake an interviewer could make"
- "We didn't have a team of people behind the scenes. We just did the show everyday & put it out there for what it was worth"
- "I was interested in the guest, & what that person had to say about themselves, & less about my own opinion. That's changed now"
- "...out of the 5,000 shows I did, less than 20 people ever wept on my show. But that's what I was known for"
- "Infamy, emotion, drama. theatre, anger, & bad behavior will always sell on television"
- "Dennis Rodman was an emotional livewire, & that appealed to me"
- "I was proudest most when we revealed something in a person's character"
- "Digital media today doesn't allow for much reflection...and we're poorer for that"
-  "We are conditioning ourselves to be a sound bite society"

Roy Firestone Interview Part 2
- "People want to be understood"
- "Life is not black or white, it's mostly black & grey, & other colors too"
- Roy addresses the controversial reception of his OJ Simpson interview on Up Close (27 years ago!!) featured in ESPN's "OJ: Made in America" Part 2
- "The fawning part of the video was a reflection of the times"
- "The LAPD bought into the whole thing too. My job was to do an interview, it was their job to get tough!"
- "If someone doesn't want to answer truthfully & live in denial what can you do?"
- "A lot of people was conned by a conman & a lot of people believed in his (OJ's) myth like I did"
- "Don't judge me because you know something I didn't know at the time. It's not fair!"
- "I judge myself in hindsight & that's why I have the regret"
- "There was a lot of nuance in the OJ story that demands people to judge me more fairly but I was not"
- "I asked Ezra Edelaman to give me a few seconds in the film to talk about what was going on at the time, but that was not afforded me....people have savaged without even trying to understand what was going on at the time"
- "...owning up to what!!"
- Jamele Hill's tweet
- "If all my interviews were suck ups I wouldn't have been on the air very long"
- "You have to take the bad with the good, I've had mostly good in my career & in my life so I have to deal with it. I am completely comfortable with what I represented on ESPN for parts of three decades" 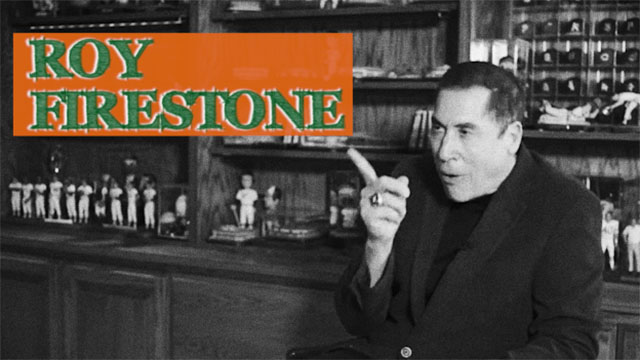 Roy Firestone is a seven-time Emmy Award-winning and seven-time cable ACE Award-winning host, interviewer, narrator, writer, and producer.  As the ground-breaking, original host of ESPN’s legendary Up Close, Up Close Classic and Up Close Primetime, Firestone has interviewed more than 5,000 athletes, musicians, actors and political figures, as well as scores of writers and filmmakers.
Firestone has recently hosted Public Television's "LA Tonight" which featured interviews of an eclectic list of legendary music, entertainment, and sports figures, including composer Burt Bacharach, record producer David Foster, songwriter Diane Warren, and tennis great Andre Agassi, among many others.
Sports Illustrated calls Firestone "The best interviewer in the business."  The late Pulitzer Prize winning columnist Jim Murray once said, “Roy Firestone isn’t just the best sports interviewer I’ve ever seen, he's the best interviewer period. That includes, Diane Sawyer, Barbara Walters, Mike Wallace, Morley Safer, any and all of them.”
Not limited to television, Firestone is also prolific on the printed page — as the author of two best-selling books, Up Close with Roy Firestone, and most recently, Don’t Make Me Cry, Roy.
Critically acclaimed as a performer, monologist, humorist, musician and impressionist, Roy Firestone is one of the nation’s most sought after live corporate performers, keynote speakers and lecturers.
Firestone has performed in more than two thousand venues spanning two decades.  He recently shared the stage with performers Josh Groban, Reba McEntire, David Foster, Forrest Whitaker and Jon Bon Jovi.
As an actor, Firestone was featured in the Academy Award-winning film, Jerry Maguire, where he played himself in an unforgettable (and often repeated) scene with Academy Award-winner Cuba Gooding Jr.
His numerous television credits include Everybody Loves Raymond and Married with Children.  Fans of The Simpsons remember him as the voice of ‘Bart Starr.’ No stranger to talk shows, Firestone’s appearances include Late Night with David Letterman, Later with Bob Costas, Larry King Live and The Tonight Show.
Firestone is also an accomplished musical vocalist.  He recently released his first CD, Another Voice, produced and backed by Grammy Award-winning fusion band, Hiroshima.