- Beginning of career and Iron Mike Tyson
- Lampley's opinion of Mike Tyson
- Lennox Lewis, future of the Heavyweights, & the great Manny Pacquiao
- The threat of Mixed Martial Arts & the UFC to big time Boxing
- Winning & losing big awards. Secret Hollywood ambitions
- George Foreman's comeback. "IT HAPPENED! IT HAPPENED!" Jim gets emotional
- Roy Jones was the most gifted athlete to step into the ring
- The greatest fight Lampley ever called?
- The beginning of reality television was The Wide World of Sports on abc
- Jumping the shark on American Idol
- Playing hurt, work ethic, and 14 Olympic Games
- Lampley's take on the steroids & performance enhancing drugs controversy
- How do you want to be remembered? Final words 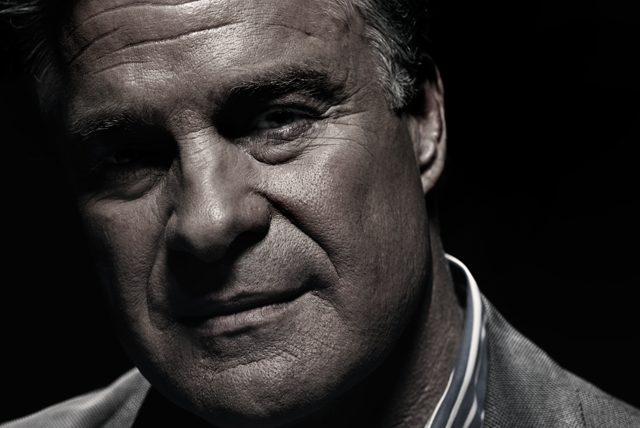 Jim Lampley (born April 8, 1949) is an American  sportscaster, news anchor, movie producer, and restaurant owner. He has been in several television shows, but is better known for his participation in the HBO Boxing series (officially HBO World Championship Boxing). He works alongside Larry Merchant and Emanuel Steward in that series. Lampley has anchored a record 14 Olympic Games U.S. television broadcasts, most recently the 2008 Summer Olympics in Beijing, China.
Lampley was born in Hendersonville, North Carolina. His father died when he was five. His mother immersed him in sports to make up for what she felt his father would have done. He was raised in Hendersonville and Miami, Florida.
He graduated from the University of North Carolina in 1971 with a degree in English and finished coursework in 1974 for a Master in Mass Communications also at UNC but never wrote his thesis because his career took off.
In 1974 while in graduate school, he was chosen along with Don Tollefson in what ABC called a talent hunt. ABC executives thought that Lampley's youthful looks would make him endearing to the college crowds they looked to attract for their college football games. At ABC, he covered such events as baseball games, the 1986-1987 Indianapolis 500, the 1977 Monon Bell game between DePauw University and Wabash College, five Olympics, as well as the program Wide World of Sports.
From 1983 to 1985, Lampley was the studio host of ABC broadcasts of the United States Football League (USFL), a spring league that featured stars such as Herschel Walker, Jim Kelly, Steve Young and Reggie White.
In 1985, Lampley along with Al Michaels served as anchors for ABC's coverage of Super Bowl XIX, the first Super Bowl that ABC televised. After the game, Lampley presided over the presentation ceremony for the trophy.

CBS
In 1987, Lampley moved to CBS and began a two year reign as anchor of ABC sports' coverage of the Indianapolis 500. At CBS, he took over duties as co-anchor on the daily news show in Los Angeles, and also was a correspondent. That same year, he began working for HBO, covering boxing and HBO's annual telecast of Wimbledon. He also attended the Albertville Olympics in 1992, as a news anchor for KCBS-TV.

NBC
In 1992, Lampley moved to NBC, where he helped cover the 1992 Barcelona Olympics, 1993 Ryder Cup, and the 1996 Atlanta Olympics. In 1993, Lampley took over studio hosting duties for Bob Costas on The NFL on NBC. Lampley moved to play-by-play duties for NBC's NFL telecasts the following year and was later replaced by Greg Gumbel. In 1995, he began working at the Real Sports with Bryant Gumbel HBO series. For his participation in that show, he has earned three Emmy awards. In 1998, he covered the Nagano Olympics and the Goodwill Games for Turner, and in 2000, he covered the Sydney Olympics, again for NBC.
In 2004, Lampley was the daytime anchor for NBC's Olympics coverage for the 2004 Summer Olympics, as well as anchoring the USA Network's coverage of the Games. In 2006, Lampley served as a central correspondent for the 2006 Winter Olympics which aired on the networks of NBC Universal. Torino 2006 was the 13th Olympics Lampley covered, surpassing the record set by America's original voice of the Olympics, Jim McKay. Lampley was again called upon to anchor for the 2008 Summer Olympics in Beijing, China, Lampley's 14th Games.

HBO
Most casual fans probably know Lampley best for his work on HBO World Championship Boxing show, and on the HBO pay-per-view telecast. As commentator in these shows, he has called some of boxing's most famous moments, such as Thunder Meets Lightning, when Julio César Chávez saved himself from a decision defeat by knocking out Meldrick Taylor (who was leading the fight on two of the three official scorecards) with only two seconds to go in the last round; James "Buster" Douglas's upset of Mike Tyson for the World Heavyweight championship. Other highlights in his career were the first Riddick Bowe-Andrew Golota fight at Madison Square Garden, where a riot occurred following the "Foul Pole's" disqualification for low blows, and the famous "It happened...IT HAPPENED!" call of George Foreman's miracle comeback against then heavyweight champion Michael Moorer when a straight right ended Morer's reign. Lampley is criticized by some viewers who see him as biased in favor of certain HBO "house fighters", while most enjoy his charisma and magnetic voice. In 1992, he won the Sam Taub Award for excellence in boxing broadcasting journalism.
Lampley also hosted a series called Legendary Nights in 12 installments in honor of HBO's three decades covering boxing in 2004, recounting 12 memorable fights broadcast on HBO in that timespan. He also hosted HBO's coverage of Wimbledon.


Lampley's movie production company, Crystal Spring Productions, has produced a handful of movies, including 2000's Welcome to Hollywood. The company has plans of producing a movie about tennis player Pancho Gonzalez, with Benjamin Bratt in the leading role.
In addition to several minor credits as an announcer in films, in 2006, Lampley portrayed himself in the movie Rocky Balboa covering the new events in Rocky's career as well as the final match against Mason Dixon. He also appeared in the 2007 sports comedy films Blades of Glory starring Will Ferrell and Jon Heder, and Balls of Fury, with Christopher Walken.

In 2005 after Bush's re-election, Lampley began to avidly express his political views and began posting on The Huffington Post website, where he revealed his belief that George W. Bush stole the 2004 election through vote tampering in Ohio. Also on The Huffington Post, Lampley retracted a claim that American deaths in Iraq are several times higher than official reports after finding out his source was fraudulent.

Lampley was one of the first program hosts on New York's sports talk radio station WFAN. More recently, Lampley can often be heard on The Jim Rome Show as a substitute host. Rome has stated on several occasions that "Jim Lampley is the smartest guy in the Jungle." Lampley has also filled in for nationally-syndicated liberal talk radio host Ed Schultz.

Lampley married and divorced news anchor Bree Walker, with whom he has a son. He also has two older daughters from a previous marriage. Walker has a daughter from a previous marriage. Lampley lives in the San Diego, California area near his son. Lampley is the former owner of two restaurants in Utah, both of which were named the Lakota Restaurant and Bar. Lampley runs a production company with his ex-wife. In 2004, they announced on the Larry King Show that they were living together and planning to remarry, but they never did.
On January 3, 2007, Lampley was arrested for domestic abuse against fiancée Candice Sanders, Miss California USA 2003, by the San Diego County Sheriff's Department.[6] A restraining order was obtained, but in February 2007, he was charged with violating the restraining order by being within 100 yards of her apartment; Lampley pleaded no contest and was sentenced to three years' probation, a fine, a domestic violence counselling program and 40 hours' community service. The DA's office investigated and Lampley will not face charges for the alleged attack. Investigators found "insufficient evidence to prove it". Former spouse and news anchor Bree Walker said her relationship with Lampley led her to believe that "he's not capable of physical violence against anybody." "Jim has been a wonderful father to all four of his kids, and has been a generous husband and ex-husband", Walker said, "Any charges of battery would surprise me."